June 15-17, 2018 – AlienCon came to Pasadena, CA and so did the crowds. This show draws those that are driven to explore the wonders of the world through the exploration of the mind, science, alternative science and metaphysics. If you’ve never attended AlienCon it’s an event you won’t easily forget. There are many exhibitors, speakers and yes, even cosplayers.

FanboyNation was able to meet up with a few guests and trade show exhibitors for some interviews. We spoke to Bri Gisella and Jesse Mansfield, show attendees, as to their thoughts on AlienCon. They were ecstatic about the show and being Los Angeles locals they came in full costume.

FBN: Bri, tell us about yourself.

FBN: What made you decided to come to AlienCon?

Bri: I attended because I’ve always been a believer in aliens, a fan of sci-fi, and my boyfriend is a true enthusiast.

FBN: What are your overall thoughts on the show?

Bri: I really enjoyed it, the merchandise and art work was extensive and the panels I watched were great. I’d love to see more entertainment and attractions included next year.

FBN: What was your favorite lecture?

Bri: Erich von Dåniken was great, I loved seeing his dynamic with Giorgio A. Tsoukalos.

FBN: What was your favorite part of the event?

Bri: Envisioning a Post-disclosure world was great, I loved that they allowed debate between the panelists and the topic was handled with intellect and care.

FBN: Did you get a chance to walk the trade show?

FBN: Will we see you hear next year?

Bri: Yes, we will absolutely be coming and in more costumes! This year we just had capes and antennae.

Bri: I think it’s arrogant to think we are the only life in the universe, and I love exploring all possibilities of what other life may be out there and all the various possibilities around their existence. I am a believer in multiple dimensions, and that there are intelligent beings we are yet aware of that originate from other planets.

FBN: Did you have a favorite presenter?

FBN: Apolla, what brings you to AlienCon this year?

Apolla: I have been a UFO researcher all my life and have been going to UFO conventions for about 5 years now. I am friends with several speakers in the scene and plan to be one myself someday. This year I am here selling my Shaman Spears at this event.

FBN: How do you like the event so far?

Apolla: It felt a little more comic con like then the other UFO conventions I have been to. Because it was more about the TV personalities and there was cosplay involved. Which I think is great because it draws in more people that are normally outsiders to the UFO convention scene. I didn’t see any lectures because I was at my booth the whole time for this event. But I always very much enjoy hearing Giorgio and Linda Moulten Howle speak, I’m sure they were great.

FBN: What’s been your favorite part of this weekend?

Apolla: My favorite part of the event was all the like-minded people who came. It’s nice to meet psychics, UFO enthusiasts, and spiritual types from all walks of life.

FBN: How’s the trade show going for you?

Apolla: I had a great time, I completely sold out of my products and got a lot of attention from the media. Also enjoyed the other vendors.

FBN: Are you a believer?

Apolla: I believe aliens are real. I have done a lot of research on the Sumerian tablets and ancient civilizations and believe ancient aliens helped genetically engineer the human race. I have also had many UFO experiences myself. And yes, they are multidimensional.

I encourage anyone who hasn’t been to a UFO convention to check one out, even if you don’t believe in aliens. The science and theories presented will for sure open your mind.

Check out some of the fans and images from the event:

For more information on AlienCon check out their website at http://www.thealiencon.com/

Next AlienCon: November 9th through the 11th in Baltimore Buy your tickets here https://www.showclix.com/event/aliencon-2018-baltimore/tag/hp-feature 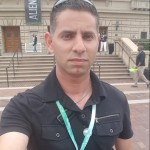 Prof. Sal W. Hanna is recognized as an expert in the field of Criminal Justice, Counter Surveillance Measures, Surveillance, Security and Private Investigations. He is also an accomplished photographer and journalist.

There are no filmmakers like Paul Thomas Anderson working today. What...

House of Horrors: A Prime Video Pop Up Shop will be in...

TUDUM Recap: The news, exclusives, announcements, trailers, teasers, and everything else...

Suddenly Drunk Review – The Title Says it All

Insight Editions’ 2021 Advent Calendars are a pop-culture treasure trove of...

Leon “King” Shlemoon Steps Into an Epic Title Fight on 10...

Court Bauer Talks MLW Fightland and the Growing the Company

Adult Continuity Comics on the Can Cultural Junk Drawer Future Comic Rock Stars Is That Racist? Revisiting the Reviled THAT'S NOT ROTTEN! The B-Reel The Cantina Scene This Week in Crowdfunding What the HELL Did I just...?
The Fantoy Comics Thanksgiving Special!

Fantoy Comics presents: Harry Potter (is not appearing in) The Quest for a new roommate!

Fantoy Comics Presents: Harry potter (is not in) The Quest for a New Roommate

I'm a smokeshow, have wings and sweat magic dust but I...

Join Whitney Grace as she speaks with artist Hamid Rahmanian, who...

Max Beckman of Half Past Two talk about opening up the...