“Get ready for an epic journey through a history of video games!”

Evoland II: A Slight Case of Spacetime Continuum Disorder is like every game you have ever played, all combined into one. Created by Shiro Games, Evoland II is an RPG where the graphics and gameplay evolve through the course of the story. Players will go from 8-bit sprites to full 3D battles and encounter challenges that parody different genres.

Founded in 2012, Shiro Games is an independent video game company based in Bordeaux. The original Evoland was released in early 2013 for PC and Mac via Steam as well as mobile devices. The original Evoland has currently sold 500,000 copies to date. By taking in feedback from critics and users, Shiro Games was able to fully realize, and exceed, the original game’s vision with Evoland II. The sequel consists of new gameplay styles and elements for a new world for returning players to enjoy, while still retaining the game’s familiar charm.

“Players can expect beat ‘em up battles in the streets, challenging puzzles, pixel-perfect platforming, and a tense shoot’em up – plus a lot more.”

Players will play as a hero who fights to protect the world he lives in from a dark future by learning about events in different timelines. Within the core of the hero’s world lies a secret that affects time itself, but can the hero change destiny or is it already set in stone?

One of my favorite aspects of the game is that the controls are straightforward. Evoland II does not complicate the experience with too many buttons, despite the variety of gameplay within the game. Evoland II is an easy to learn RPG for all ages.

Shiro Games is most well-known for their Evoland series and it is easy to see why. Evoland II is all of your favorite classic games in one. Evoland II will be available (for a steal) at $19.99 on August 25, 2015 for PC (and eventually Mac). Preorder now at www.evoland2.com. 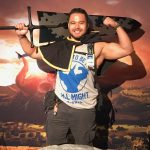 Angelo loves everything food, barbells, comics, anime, manga, and toys. He is a competitive powerlifter and aims to be stronger than the Hulk. His best lifts in competition are a 600 lb squat, 405 lb bench press, and 685 lb deadlift.

Almost Love is romantic comedy about a group of friends figuring...

Faruq Tauheed Gets to the ‘Roots’ of Things

Katee Sackhoff has become a television and voice over icon in...

The San Antonio Film Festival (SAFilm) is celebrating 25 years of ...

Marvel United funded in the first 31 minutes! Now you only...

Marvel United, the first-ever Marvel game on Kickstarter brought to us...

McCafé Frappé in a Bottle is the best way to start...

After a handful of amazing matches at WrestleMania 36 Night One,...

People have questioned the motives of Vince McMahon and his desire...

LA Wildcats Fall to the Dallas Renegades in the Home Opener

Adult Continuity Comics on the Can Cultural Junk Drawer Future Comic Rock Stars Is That Racist? Revisiting the Reviled THAT'S NOT ROTTEN! The B-Reel The Cantina Scene This Week in Crowdfunding What the HELL Did I just...?
Bodybuilding Guru George Farah Educates us on Staying Healthy during COVID-19

Cedric is surprised at the Dark Lord's new digs.

Whitney Grace is digging through her queue of old new stock...

James Maslow is an American singer, actor and songwriter best known as the star of...

Jason Lazarus is a Los Angeles based composer for film, television, and...